Being more accustomed, on a daily basis to the Romney, Hythe and Dymnchurch Railway's fifteen inch gauge, Mister Paddy Hamilton of Dungeness Beach applies his best approximation of a diligent nineteen seventy Jenny Agutter as he grapples with the wonderfully analogue unmanned Cold Blow crossing at Walmer and its two lines of fifty six and a half inches, the standard railway gauge applied by George Stephenson. According to railway gauge historian types, this measurement is a direct result of the steel bands on the wheels of Roman war chariots which were spaced so that the wheels were just outside the heels of the two horses pulling the chariots and therefore managing to avoid hitting them. Not too far from away from here on the beach at Walmer stands a concrete memorial to commemorate the first landing of Julius Caesar in 55 BC. It must be noted that Mister Hamilton himself resides at Stik and $toneland in a nineteenth century railway carriage. 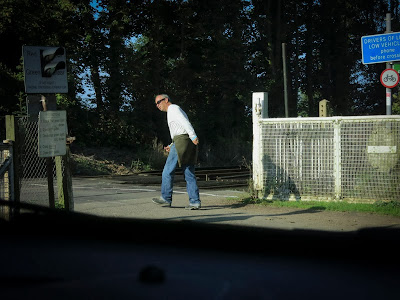