The Beginning of the End by Rowena Macdonald 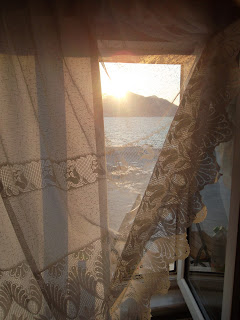 Clare awoke in Louisa's guest bed next to Rory. The sun was streaming through the curtains, turning the room into a box of light. Louisa's bed-linen was as crisp as new money. Against this unsullied backdrop, for once without the chaos of the children, Clare felt she and Rory could start over.
Rory was snoring like a man underwater, submerged by the alcoholic deluge of the previous evening.
“To business and pleasure,” Louisa had toasted, after Philip had poured them all the first of many glasses of wine.
“To more pleasure than business,” Rory amended.
They all chinked their glasses.
By the end of the evening Rory had been too drunk to stand. Philip helped Clare drag him upstairs, where he collapsed on the bed, hogging most of the mattress. As she squeezed in beside him, she couldn’t help overhearing the rhythmic creak of the bed in the next room and Louisa and Philip’s stifled grunts of pleasure. Thankfully, Rory was too comatose to notice.

When she returned to the bedroom after her shower, Clare found Rory had woken and disappeared. She was roughing her fingers through her hair and wondering whether she’d packed her comb when Louisa trilled “Coffee’s ready”.
“Coming.” She made her way downstairs, ducking beneath a low beam upon which hung one of Philip’s photographs of Louisa: on a beach in a silk dress, her nipples jutting like pebbles.
Rory and Philip were lounging at the kitchen table with the Saturday papers while Louisa ministered to them like a geisha, as immaculate as ever, her black hair caught up in a chignon and her zesty perfume mingling with the smell of coffee.
“It’s such a gorgeous day I thought we should go to the beach. How does that sound, Clare?”
“Sounds great.”
She placed a cup of coffee in front of Clare along with the milk jug and a bowl of sugar crystals that looked like coloured sand. All her movements had a choreographed elegance as if she was performing for an invisible camera. Clare wondered if this was a hangover from her modelling days. Five years ago Louisa had graced the covers of all the top magazines, many of them shot by Philip. Since then she had swapped the catwalk for an art gallery on Cork Street. She had invited Clare and Rory to her cottage in Norfolk as Clare was one of the artists she represented. Clare had envisaged, rightly, that her holiday home would be too much of an exquisitely tasteful domain for two boisterous little boys and had left Josh and Alfie with her parents. The weekend would be a rare adult treat for her and Rory, a chance to give each other some undivided attention.

“Amazing how she finds the time to make everything so beautiful, isn’t it?” said Clare, as they gathered together their beach stuff in the bedroom. “I suppose, the thing is, she doesn’t have kids messing everything up.”
“Mmm.” Rory pulled on shorts and a t-shirt and surveyed himself in the mirror. He was a tall, handsome man and his legs were one of his best features.
“I think, in a way, her homes are where she exercises her creativity.”
“Mmm.”

The tide was out so the sand stretched for miles beneath the huge empty sky. The sea was like a strip of torn grey paper in the far distance.
Louisa kicked off her flip-flops. “Don’t you just love the feel of sand beneath your feet?”
“Absolutely.” Rory kicked off his. “Shall we see if we can find somewhere really private further up the beach?”
The four of them walked along the dunes to a hollow where no one else could be seen.
“Sea air’s just what I need to blow the cobwebs away.” Rory stretched and pulled off his shirt. “We should have brought the cricket set.”
“Thank God we didn’t. I’m so glad you won’t be able to rope me into playing,” said Clare. She began to undress under her towel, wobbling on the hot sand as she placed one foot into her swimsuit and then the other. She wished she’d been as prescient as Louisa who was wearing her bikini under a sarong, which could be whipped off with ease.
“Excuse me. Nature calls.” Rory bounded up the dunes and stood with his back to them and his calves braced. When he returned Louisa was unpacking a hamper of delicacies. “God, Louisa, you are a bit of a domestic goddess…Clare, have you checked out this picnic?”
“Looks delicious.” Clare was smearing factor 25 onto her nose.
Louisa arranged first the food on a red and white cloth, then herself under a straw sun-hat on a pink towel with a copy of the latest Booker Prize winner.
“Don’t you want some of this, Louisa?” Rory was smacking his lips over ciabatta stuffed with Serrano ham.
“No, I’m not hungry yet.” While the others demolished the ham, the pâté, the herb-infused olives and the smoked salmon quiche, Louisa ate four cherry tomatoes and three segments from a white peach, which Philip sliced into twelve with his Swiss Army knife. Clare felt like an over-ripe Brie, creamy and burgeoning in her M&S swimsuit with its matronly stomach control panel, compared to the thin Gruyère sliver of Louisa in her cheese-wire bikini.
After lunch, she took out her watercolours and began painting the horizon. Rory fell asleep underneath the sports section of the paper and Philip wandered off. Louisa peered over Clare’s shoulder. “You’re so lucky to have your talent,” she murmured, before closing her book and lying on her front with her bikini unclasped at the back. Clare’s brushstrokes became tight with the anxiety that she might turn over at any moment. She remembered Louisa once telling her wistfully that she would “always have her art”, that it was “the only eternal thing”.
Philip returned with an armful of driftwood and began building a fire.
“Darling, have we got anything I can use as kindling?”
Louisa, who also appeared to be asleep, did not reply.
“How about the sports section?” said Clare.
“Oh yes.” Philip crept over and, as he carefully removed it from Rory’s face, Rory awoke with a snort.
“What’s going on?”
“Making a fire.”
“Oh. Good idea.” Rory sat up and rubbed his face. “Tell you what I fancy, though.”
Louisa opened one eye.
“What?” said Clare.
“A swim. Anyone else up for a dip?”
“Once I’ve got the fire going,” said Philip.
“How about you go in and tell us how cold it is,” said Clare.
Rory looked hopefully at Louisa. “Louisa? Coming?”
Louisa remained lying face down. “No. I never swim in England.”
Rory harrumphed off to look in his bag. “I’ve forgotten my trunks,” he announced, after half a minute of rummaging
“Really?” said Clare. “Shall I have a look? You know you can never find anything.”
“No, honestly, I’ve searched the whole bag. What a complete bummer.”
“How about swimming in your shorts?” said Philip.
Rory looked down at his shorts.
“Or you could even swim in your pants,” murmured Louisa, still from her prone position.
“Oh no, not his pants,” said Clare. “They’ll go all see-through.”
“You know what?”
“What?” Clare frowned. Rory was wearing a light-bulb smile.
“I might go skinny-dipping.”
“Oh no…Rory…please…don’t be silly.” Clare’s frown grew beseeching.
“Oh come on…there’s no one around…”
“…there’s us…” said Clare.
Rory gazed about the empty beach. “Sometimes one wants to cast everything off and be free…”
“Don’t let us stop you,” said Philip. “We’ve seen it all before, haven’t we, Lou?”
Louisa did not open her eyes so her expression was unreadable and before Clare could protest any more, Rory had whipped off his shorts and his pants and was standing in front of them, entirely naked, his penis swinging like a large squid between his thighs. He was, she had to admit, almost as fine a figure of a man as the day she married him. Ten years of their shared history were hardly written on his body, whereas she couldn’t say the same for herself: two children, good food, too much drink, not enough exercise were scrawled indelibly all over her. She and Philip watched as he charged across the sand into the waves and roared with exhilaration. Louisa fastened the back of her bikini top, turned over and sat up. “Rory’s got a lot of joie de vivre, hasn’t he?” she said.

When he returned, dripping and panting, his penis had turned into a shrivelled prawn and he was cupping his hands over it. “Christ, my bits have shrunk completely.”

That evening, after they had half-drowned themselves in another deluge of alcohol and staggered upstairs, Clare unpacked their beach bags and hung her swimsuit on the windowsill to dry. When she unrolled Rory’s towel, a scrap of black nylon fell on the bed.
“Rory! Here are your trunks! You had them with you, after all.”
Rory, reclining against the lavender-scented pillows with his hands behind his head, simply shrugged and smiled.

Posted by Rowena Macdonald at 09:19