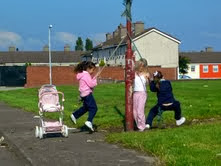 Last night saw the opening of The Everyday Experience, a group show of international architects, designers, artists and filmmakers at the Irish Museum of Modern Art (IMMA) in collaboration with the Irish Architecture Foundation (IAF). The project invited a response to the impact and practice of architecture and its effect on our daily lives. In collaboration with Urban Agency, an Irish/Danish architecture practice we explored children's play in an urban context - My anti-computer game photographic project, 'Playstations' was the basis for our exhibit. Over the course of two years I set out to document one hundred lampposts with rope attached on the streets of Dublin - In the past, when children had little else but the streets and their built environment to play with they made their own fun. I did it in the 60's and 70's growing up in villages near Deal in Kent - We built camps, dens, robbed fruit and climbed trees. On the streets of Dublin, kids tied a length of rope to lampposts and swung around them at great speed. This nameless pastime has gradually disappeared from the centre of Dublin as traditionally working class areas have become gentrified - The offspring of middle-class parents tend not (to be allowed) to scale a lamppost, attach rope and then swing out into the traffic. The other major factor in the decline of this most basic pastime are electronic devices. Kids have started doing virtually what the used to do physically - They play football in front of a screen, kill each other on phones and don't even have to go out robbing and joyriding cars - They can do it on 'Grand Theft Auto'!

Much of the rope is cut by the Garda (police) but when I'd find a full length of rope on a lamppost it was like a magnet for kids of all ages - I call them 'Playstations'. Setting out with a map I trawled the periphery of the Irish capital, the sprawling housing estates and flats complexes proving most fruitful, slowly documenting a dying pastime. I stopped after I'd found 100 Playstations. In response, Urban Agency designed a simple frame in the shape of an octahedron with a swing using the ubiquitous blue rope. This prototype Play Station, if mass produced should only cost around €300, apparently cheaper than a garden swing at Argos. My 101 images and prototype Playstation will, from today be on display and available for swingers of all ages at IMMA for three months. 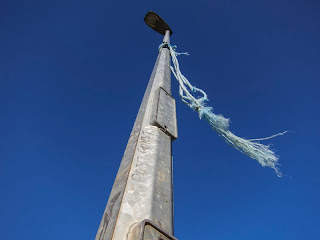 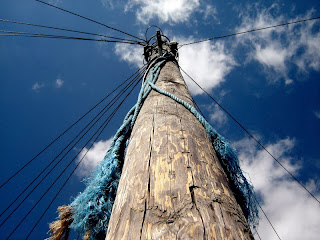 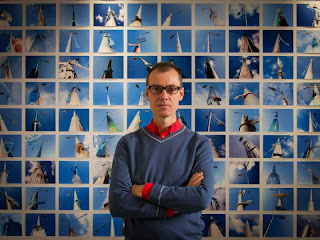 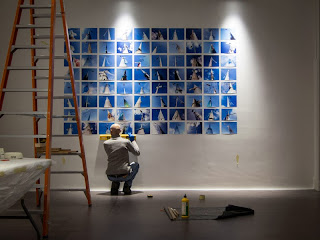 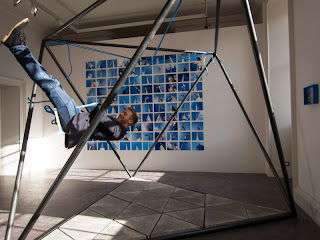 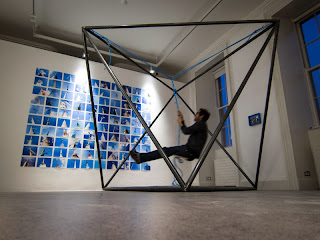